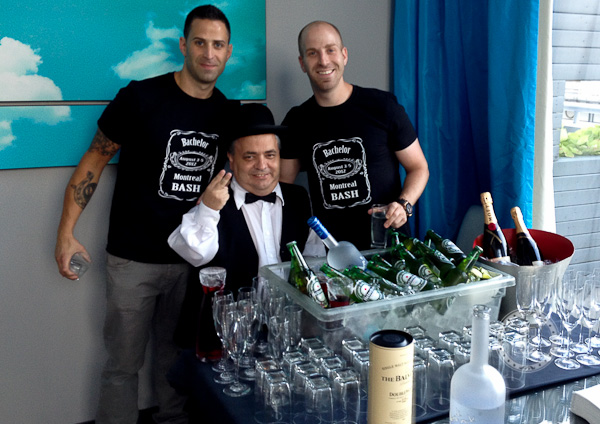 Posted at 14:21h in Bachelor Party by Oren

Can a Bachelor Party in Montreal Top Vegas?

I got a call two weeks ago from Evan in Toronto, a best man in trouble. Evan explained to me that some last minute issues came up and that they could no longer throw their bachelor party in Las Vegas. They were coming to Montreal. Evan was rolling into town with 15 guys and they were used to only the best of the best. He was skeptical that we could deliver an experience close to what Las Vegas had to offer. I assured Evan that not only could we deliver, but that the experience would blow them away. After some back and forth, we started planning out one crazy night.

Private Party in the Suite

7pm: We starting by throwing one of our signature private parties in the penthouse suite of the W hotel. In the suite, we had:

We planned the party so there was a slow build, as only Evan was given all the details. We had the midget walk in with the catering and the two waitresses started to disrobe. The guys were loving it. Our new model shortly gave up serving the guys and started giving the bachelor lap dances (old habits die hard).

About 30 minutes into the festivities the main event walked in, two smoking hot “lesbians”. While I would love to give details of what happened next, it’s probably best for everyone involved that I don’t. However, I will let you know that what started out as a 2 girls show ended up being a 4 girls and a midget…

But don’t take our word for it…

10pm: Our previous bachelor party review tells us there is never too much nudity so Rod took the boys over to the hottest strip club in Montreal, Kamasutra, for some quick laps. There was a blur of naked strippers all over the place and many of the guy disappeared to the back. While at Kamasutra, a group of guys tried to drop our name saying they had a reservation in order to skip the huge line outside. Needless to say our good friend JP, the manager, did not like this and ended up banning them from the club (that’s JP being nice…).

Midnight: We took those still left standing down to New City Gas. We escorted them in like rock stars to the best table in the place. Too many bottles were popped and not much else of the night is clear…